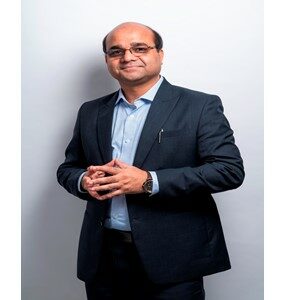 While the traditional ATM model faces challenges amid cost and infrastructural issues, Micro ATMs have been gaining traction steadily. In a recent data circulated by RBI, Micro-ATMs have witnessed an uptick from 3.7 lakh transaction in January to 5.1 lakh transaction in September 2021. If we compare the growth, Micro-ATM grew by 37%, whereas traditional ATM grew by mere 2% in nine months of 2021.

In conversation with Anand Kumar Bajaj, Founder, MD & CEO, PayNearby, IBS Intelligence discovers more about the importance of micro-ATMs in India and how they are filling the gaps for a cash obsessed democracy.

How are Micro-ATMs filling the gaps created by traditional ATMs models?

The distribution of traditional ATMs within India is unbalanced, urban areas having 69 ATMs per one lakh population, semi-urban areas having 53 ATMs per one lakh population and the rural areas having a meagre 9 ATMs per one lakh population. When compared to its global counterparts, India is among the countries to have the lowest ATM penetration in the world. Over 65% of the Indian population resides in rural India, yet, they account for only 20% of all ATMs in the country. People in rural areas face a huge problem in cash withdrawal due to the unavailability of ATMs or banks nearby. The cost of infrastructure acquisition and servicing is one of the main reasons that formal financial institutions find it difficult to operate ATMs in rural areas. And, this is one of the main reasons why Micro ATMs have been gaining traction steadily by filling in the gaps created by the traditional ATMs.

Additionally, with the surge in AePS transactions in recent years, along with the pandemic, Micro ATMs have been gaining more popularity. Many FinTechs are working on Micro ATMs and expanding the market by offering financial services to the unserved and underserved population and making primary banking services easily accessible in remote areas. The Micro ATMs, in the rural areas, come as a respite for people who usually have to travel long distances just to access the nearest ATM or a bank. These handheld machines can be set up at local shops and can use the same cash box of these shops, keeping the cash flow consistent and available at all times.

Currently, with its one-lakh Micro ATM network, PayNearby is nearly at half of the distribution of traditional ATMs in the country. And, in the coming years, we aspire to surpass this number and set up about five lakh MATMs so that every citizen in the country has easy access to cash that is lying in their accounts.

How are Micro-ATMs increasing cash-flow in unbanked rural and semi-urban areas?

The growth and success of any economy today depends on access to the formal financial and digital ecosystem by all sections of society. During this pandemic, one thing became clear – rural India was and continues to be a cash-driven economy. With cash being the primary mode of transaction in rural India, ensuring a continuous flow of cash is essential to keeping the rural economy operational.

Now, when the rural communities have difficulty in accessing ATMs, such challenges continue to slow down the provision of basic banking amenities to this segment of the population. This is where rural fintech players are helping bridge the gap by expanding the network of Micro ATMs to the last mile customer. For ATM cash withdrawals, Micro ATMs are a game-changer for Indian consumers, especially the marginalised population located in tier I, tier II cities and beyond. Micro ATM offers cash withdrawal facilities to the customers without needing them to visit a physical bank branch or an ATM centre. With the surge in AePS transactions in recent years, Micro ATMs have gained more popularity. This reflects in the cash withdrawals from Micro ATMs, which amounted to ₹26,830 crores in August this year, compared to ₹19,513 crores a year ago.

Micro ATMs were instrumental in facilitating cash withdrawals during the current pandemic, especially for the withdrawal of the government’s disbursement of ₹ 1.75 lakh crores into Jan Dhan accounts of workers, labourers, and farmers, among others, who were out of work and needed cash. By ensuring all citizens have access to cash all the time, even beyond banking hours, Micro ATMs are increasing the cash-flow at the last mile.

Can we expect more facilities in future from Micro ATMs?

The journey for Micro ATMs has just started, and already, it is creating huge waves in the Indian economy. They are an ideal backup for enabling essential cash transactions when the traditional ATMs run dry. Further, Micro ATMs are more viable than conventional ATMs due to low infrastructure cost and operational efficiency through mobile connectivity.

Today, advanced Micro ATMs come equipped with modern facilities like chip-reading provide all conventional ATM facilities such as accepting debit cards, making balance inquiries and generating a mini statement. PayNearby’s 2-in-1 Micro ATM + MPOS machine allows easy access to cash withdrawal as well as card acceptance at the last mile. Customers can use any physical card or mobile with tokenization or UPI QR to carry out all digital payments for their regular purchases.

Also, with PayNearby’s 2-in-1 Micro ATM + mPOS machine debit and credit card payments and cash withdrawals across all leading banks are available. With these innovations, local stores, even in the remotest areas, can easily process contactless payments on their Micro ATM devices. On the consumer side, the solution is as easy, secure and quick as exchanging cash, creating seamless payment experiences.

The rise in Micro ATM and other digital payment transactions are indicative of the huge latent demand that exists for easy to use digital payment technology across the country, especially in tier II and beyond regions. At PayNearby, our focus will be to empower our retailers and consumers by blending easy-to-use technology with last-mile connectivity so that we can bridge the digital divide and create an equal Digital India.

What has led to the sharp growth in setup of Micro ATMs over traditional ATMs?

Micro ATMs are game-changers in the way in the way they carry out transactions. They aim to bridge the gap between customers and their financial needs. The lack of banking infrastructure in rural regions – which often rely on cash – often results in a sizable demand-supply issue. That is why Micro ATM penetration is growing rapidly in these areas. As they are portable and easy to use, they go a long way in improving banking access for the underbanked. Additionally, these POS machines provide many financial services, including cash deposits, cash withdrawals, fund transfers, and eKYC-based saving account openings, which makes them a robust and efficient payments solution in sparsely populated regions.

The advantages of Micro ATMs in a digitized economy are manifold. Apart from their potential widespread reach, these POS devices can be easily installed and used at almost any location, such as grocery and kirana stores, making it easy and convenient to be used by customers. Furthermore, installing a Micro ATM also helps increase a merchant’s income with additional revenue. For every transaction, the merchant gets a fixed commission – depending on the distributor and the banks.

Outlook and growth potential of MATMs in 2022

As this country moves towards achieving its vision of being a digital economy, Micro ATMs will play an increasingly crucial role in alleviating poverty and accelerating the reach of basic banking operations by connecting the vulnerable sections of our society. Micro ATMs, owing to their portability and inter-operability, are designed as an answer to bridge the banking gap for rural Indians. Developing a robust Micro ATM network is simply the start of an extended journey that will ultimately promote the easy availability of essential banking services in every corner of the country. Thus, there is growing demand and higher penetration for Micro ATMs to reach the last-mile of the country and address the problems faced by the rural population in fulfilling their cash withdrawal requirement.

The steep rise in volume and values of Micro ATMs are a testimony to a burgeoning revolution within the digital banking ecosystem. India is a population of 1.3 billion. To ensure that all citizens have access to basic financial services is a long journey ahead. While Bharat is adopting to getting financial services through their trusted local stores, we need to port this local trust and layer it with the right tools, training and technology to universalize digital banking in the country. With the constant innovation in the payments landscape, and tech-led fintechs resolute to make India financially empowered, Micro ATMs are slated to spearhead this transformational journey.